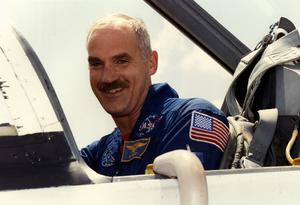 Captain Bill Readdy is a 1970 McLean High School graduate and a longtime resident of Northern Virginia. A 1974 Naval Academy graduate, he majored in aerospace engineering and served in the Navy as a carrier pilot, and test pilot. He was selected by NASA in 1986 and served as a research pilot, space shuttle astronaut, program manager and administrator for spaceflight operations. After three decades of service he retired and has devoted his time to non-profits focusing on STEM education and entrepreneurial startup technology companies. Bill enjoys sci-fi, baseball, golfing and walking the dogs.