There are currently over 43,000 objects launched by humans known to be in orbit around the Earth. Only about 5,400 of these objects are active satellites (and 2,000 of these are from one company - Starlinks from SpaceX). The remainder are what is called orbital or space debris: inactive satellites, rocket bodies, pieces of spacecraft, etc. Professor Patrick Seitzer will discuss where all this debris came from, what the risk to active satellites is from debris, how to minimize the creation of future debris, and plans to get rid of existing debris. Finally, the planned launch of 100,000 new satellites into low Earth orbit will change the appearance of the night sky forever unless precautions are taken. Professor Patrick Seitzer will discuss how astronomers are working to minimize the challenge posed by all these new satellites.

Patrick Seitzer is a Research Professor Emeritus in the University of Michigan Department of Astronomy in Ann Arbor, Michigan. His specialty is observing space debris. However, he started his career studying star clusters: how they form when galaxies collide, and the motions of stars within globular star clusters. Professor Seitzer grew up in Arlington, Virginia. He holds an undergraduate degree in physics from Georgetown University, and master's and doctoral degrees in astronomy from the University of Virginia. He has lived and worked at observatories in Australia, Chile, and the United States.

The Friends will stream this free talk from on our YouTube channel and Facebook page. No reservations are necessary. Use one of the links below to participate on March 17 at 7:30 PM EDT. 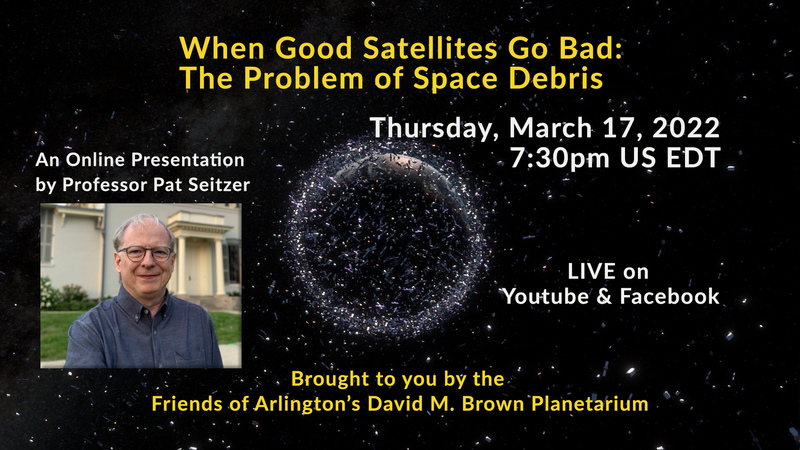