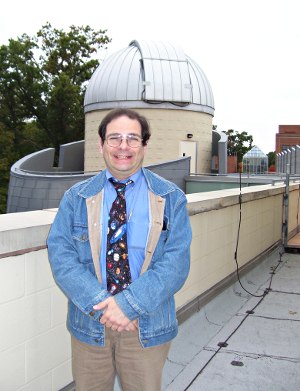 Dr. Harold A. Geller is Observatory Director and Term Associate Professor at George Mason University (GMU) in the School of Physics, Astronomy and Computational Sciences. He is co-Investigator and STEM Team member for the Virginia Initiative for Science Teaching and Achievement (VISTA). In 2012 (and 2013) he was named a Solar System Ambassador for the NASA Jet Propulsion Laboratory. In 2010 and 2009 he shared in six Telly Awards for online educational videos in association with Astrocast TV. In 2008 Dr. Geller was awarded the GMU Faculty Member of the Year and he authored a book titled Astrobiology: The Integrated Science. From 2006 to 2008 he was the Associate Chair of the Department of Physics and Astronomy at GMU. Notable achievements include past President of the Potomac Geophysical Society; award-winning tour guide and lecturer with NASA Goddard Space Flight Center; producer of two educational multimedia CD-ROMs; faculty at Northern Virginia Community College; doctoral fellow of the State Council of Higher Education for Virginia; and, lecturer/operator at the Einstein Planetarium in the National Air and Space Museum, Smithsonian Institution. Dr. Geller is author of four books, most recently All the Secrets of the Solar System in Large Print and contributed chapters to edited volumes, most recently Extraterrestrial Altruism. He has published over 75 papers in education, astrobiology, astrophysics, and biochemistry. He has been interviewed or quoted in the USA Today, Washington Post, Huffington Post, The Arts and Entertainment Magazine, Astrocast TV, WTOP News Radio, News Channel 8, and The Skeptic.